Mums In The Wood was very pleased to meet with Ms Dipti Kanani, founder and headmistress of Casa Dei Bambini and chat to her about her life and how she came to have founded the Montessori. Listening to her inspirational story, really brought home the love she had for the work she does and her students and how much it means to her to teach and prepare these little minds for their next steps in their academic journeys.

Having recovered from cancer 10 years ago, Ms Kanani wanted to do something that would make a difference. She wanted to do something that was meaningful both to her and to others. Initially she focused on trying to start a school for children from the slums in India. Having had a career in Marketing and Event management, she retrained as a Montessori teacher.  She preferred Montessori ideologies because of the deep spiritual and philosophical approach the method follows. She firmly believes that the Montessori method teaches the teacher to look at themselves and the impact of their actions on the children they teach. “It is a method”, she emphasises, “which helps a teacher to trust a child, builds on understanding emotions, attitudes, encourages thinking reflectively, and so on”. She also talks about how the children have had a huge impact on her life and how much she values being able to nurture good habits, help children think independently and find solutions without necessarily being goal oriented and competitive.

It is very clear to see how much teaching means to her and she is very much a hands on headmistress. The children clearly love her and are keen to involve her in everything they do. It was wonderful to see the interaction between her, the teachers and the children during the course of my visit. 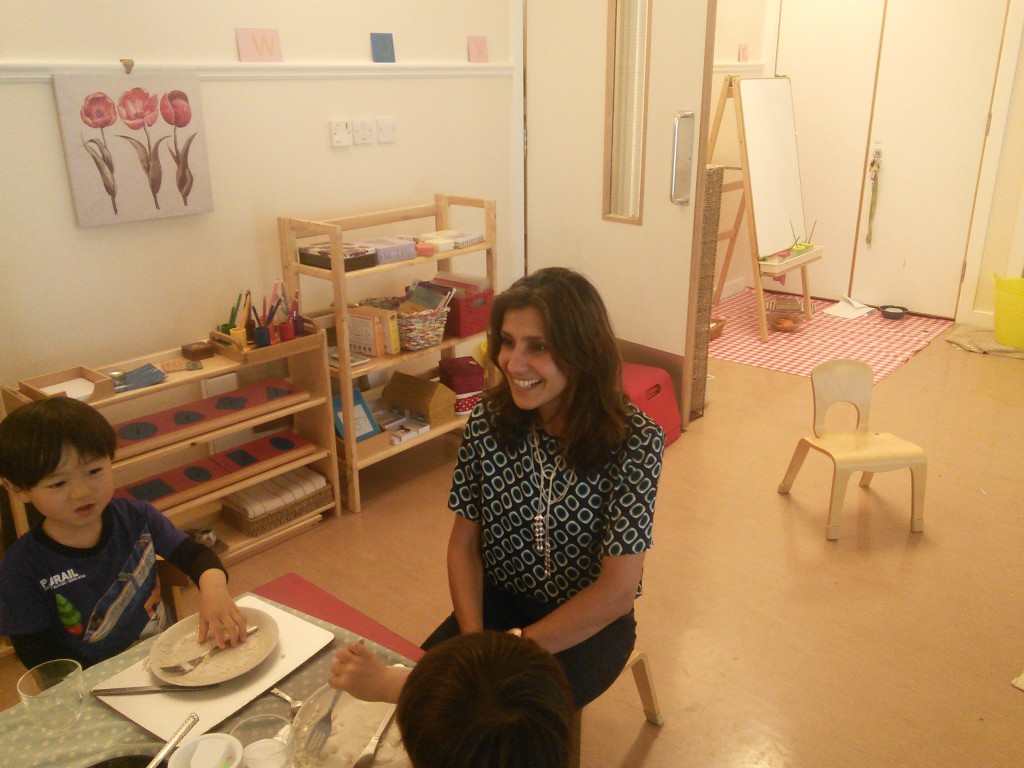 What does a Montessori environment provide to a child over and above a traditional nursery or nursery school environment?

Now this is a difficult question.   We are lucky in London to be offered access to such wide ranging and diverse provisions, all with differing levels of quality and pedagogies that it’s not fair to generalise and say that one provides something over and above the others.  The crucial difference is perhaps in Montessori’s view of the world, who saw children as far more than simply scholars. In her view each child is a full and complete human being, the seed of the adult man or woman he or she  will become.  In this sense an authentic Montessori School will have the following attributes:

Montessori schools place emphasis on helping children build their ‘character’ right from the start, to develop independence, self-respect, love of each other and passion for self chosen work.  Together these character traits will help prepare a child for academic life and eventually  a career in society.  We encourage children to build positive traits and habits by creating the right classroom environment where children are encouraged to think about the repercussions of their actions on their community and contribute towards the care of plants, animals and materials.

Children not only select their own work most of the time, but also continue to work with their tasks, repeating them over many weeks or months until finally they have refined their own skills and ‘it’s easy for them’, and they can teach it to younger children.  They participate in their own learning process by having hands on, direct access to the learning materials.  This encourages children to think for themselves and develop a self belief in their own abilities.

As children grow older and more capable (some nursery schools have children as old as 6), they naturally assume a greater role in helping to care for their learning  environment and meeting the needs of younger children in the class. The focus is less on the teacher led learning and more on the entire community of children and adults, much like one finds in a real family.  What we discover is that children become more socially aware, learn to share, take turns and develop respectful friendships with another. As children develop this emotional intelligence they will better equipped to work in teams, which we know  will be vital in their adult life.

In authentic Montessori Schools, the overall environment is free from one-up manship and needless competition and prestige.  Teachers place less emphasis on who is the ‘fastest’ and ‘quickest’ child, or who has the most stars.  Because children learn at their own pace and become experts in what they are passionate about, children are unlikely to be compared or judged.  In turn this helps to build self esteem and a more positive view of ‘the self’, so critical in a child of such tender age.

The role of the traditional nursery teacher is very different from that of a Montessori Directress.  The  Directress facilitates learning by encouraging children to explore and work things out for themselves.  The Directress understands that the real work to be done is by that of child and her role is that of a mentor and to inspire and motivate the child to action.  Children effectively teach themselves skills they need to do things and such auto education is observed in many authentic Montessori classrooms.  We often hear children saying ecstatically,  “I did it myself!”.

A Recent study about children who help other children is published here.

In the Netherlands, there are as many as 20 Montessori Primary Schools in Amsterdam alone and they fit in as part of the public education system (unlike here where they are mainly private). In September 2013, RTL news reported that students at Montessori schools across the Netherlands performed better than those at traditional schools in their final tests at the end of primary school.

Is a child who spends their early years in a Montessori well prepared to tackle the 4+ or 5+ assessments that have to be taken in order to gain entry to a prep school as they would be in an academic nursery school? If so, how do you incorporate that preparation to a Montessori curriculum?

In Montessori schools we prepare a child for lifelong learning, to develop a love and passion for education which we hope will remain with them throughout life. You only have to look at the successes of Montessori students such as Google’s founders Larry Page and Sergei Brin, Amazon’s Jeff Bezos and Wikipedia founder Jimmy Wales to know that Montessori schooling prepares children for a great start in life. In our schools, children do not work for grades or external rewards, nor do they simply complete assignments given to them by their teachers.  Children learn because they are interested in things, and because all children share a desire to become competent and independent human beings.

Our children go on to many schools in the area, including the private prep schools but we do not specifically prepare them for these assessments. For parents who are convinced that the 4+ or 5+ assessments are the way to go, we have a selection of tutors we can refer them to, who are much better placed to tutor their children.

What would be the best academic route, in your view, for a child who has their early years education in a Montessori environment?

I don’t believe there is a ‘best academic route’ but simply a route that suits a particular child.  Some of our children remain in the Montessori System up until the age of 9 or 11, and then transfer to a private or mainstream school, whilst others leave to go to mainstream schools at reception age – for financial reasons, more than anything else.  It’s worth remembering that the Montessori programme is a three year programme and there are definite benefits to children remaining at school until the age of six, or at least up until Reception age.   Many children who eventually leave Montessori Schools at either 5 or 9 years of age go on to study at schools that are quite academic in nature and have transferred with relative ease.

One consideration would be whether a parent wants their child to be enrolled in a later Montessori programme at the age of 6.  If that’s the case, then they should choose to register their child in an authentic Montessori preschool/nursery from aged 3 right from the start. The primary school/ elementary programmes build on the exercises and materials taught in the earlier nursery schools’, and these materials are well thought out and scientifically designed to help children understand quite complicated concepts, simply and clearly.  In my school, we introduce the idea of the decimal system at the age of 4, by showing children concrete models that bring the abstract concepts to life.  I have known many children who go on to develop a love of Maths, simply by moving through the Maths curriculum. A child who has not had access to these materials in the formative years, will find the transition into elementary difficult, if not impossible.

An authentic Montessori such as Casa Dei Bambini Montessori School has the full compliment of materials to advance a child’s learning up till the age of 6. Children in our classrooms can learn Maths concepts such as long division, multiplication with numbers in the thousands, and learn to read fluently in English.  It is unlikely that a Montessori school that simply bases their curriculum on Montessori methods will have access to these materials, or at the very least be implementing them.  It’s worthwhile asking about the qualifications of the staff, how long they have trained for and how they interpret the Montessori ethos.  If in doubt they should speak to the AMI for more clarification on what constitutes a ‘good quality Montessori setting’.

Is there a settling in process and if so how long is it?

We have a very well thought out and staggered settling in process to help children feel comfortable in our setting.  First of all, before children even starts nursery, we encourage them to visit a few times and become accustomed to our environment. They’ll have an opportunity to have a snack, paint, or play with the children so that they can take away a positive impression of their experience with us.  Then we do a home visit before the child starts where we will try and find out as much as we can about the child before they start.  We schedule children to start with us in the afternoons, where we have an even better staff to child ratio.  This allows us to give each child the attention they deserve when they are at their most delicate. Children then settle for an hour or so a day, and this is increased by increments of 15 minutes until the child is able to stay a full 3 hours.  Most children have started to settle with us after about 2 or 3 weeks.

What is the staff to child ratio?

Mornings 8 to 1 and afternoons 4 to 1 as many of our younger children leave at 12pm.

Casa Dei Bambini is a small but lovely nursery where children of mixed ages work together following pure Montessori methods. The children have access to a lovely garden and grow their own vegetables and flowers. They are also, often taken to the park for an outing. The children seem happy, focused and engaged and it was wonderful to see a few of them come in, out of the garden, of their own accord, sit at a desk and start engaging in various activities. The classroom has plenty of natural light and the garden is secure and walled in. It is a welcoming space and children with wide ranging abilities, who communicate in multiple languages and who come from a variety of different cultures work beautifully together.